Last year I was experimenting with tapers for 1 wt and 2 wt rods. I came up with a good 2 wt, but the lines are so light that if you fart the line gets blown around. It was very difficult to cast with any distance and if there was any wind forget it. I made some interesting rods when this experiment was going on, but have since moved on. One of those rods was a 8'1" 2/3 weight. I really enjoyed a 3 wt line on it because I am a C+ caster. I hope that I am not being to generous to myself. Bamboo rods are wonderful fishing instruments. Unlike their graphite counterparts you can usually use a multitude of lines on a particular rod and get a range of good actions. This particular rod would cast a 2 wt line with speed and precision through any kind of wind. This also helps us casters who struggle with fishing and casting at the same time!

Then along comes a group of fisherman that are professional casters. The kind of people you don't want to stand close to when you are casting. They love medium flexing rods so they can feel the rod well into their hands. They love medium action rods because they know how to cast too. It reminds me of story, yes story time. Some years ago I played golf. On one particular Monday I was suppose to play golf with a friend and a couple of his friends. One of his friends was Tom Watson. I was very excited to get to play with the world famous golfer. However, as fate would have it Tom won a big tournament that weekend and didn't get back to town by Monday. One of the other people I played with that day was Stan Thirsk. Stan discovered Tom and was his early coach. We played 9 holes together that day. I played the best golf I had ever played for about 4 holes. The other 5 holes not so much. I was so proud of myself. If I remember correctly I believe I almost hit Stan with a ball when I was hitting out of a sand bunker. Then to smooth it over I jokingly said I did it on purpose to make sure he was paying attention. The old reliable joke didn't go over so well. However, back to the morale of the story. At the end of our golf outing I asked Stan what were a few things that I could do to improve my golf game. He said this, "It's not what you are doing wrong, its what you are not doing right" and then he proceeded to say about 5 things I was doing wrong, none of which I really remember. I feel this way sometimes about my casting, especially out west when the wind is blowing. A great cast is not bought, but earned! It takes time and dedication to teach your muscles what to do and when to do it. This group of great casters has a leader and his name is John Juracek. John is a great caster and very knowledgable about fishing. I am fortunate enough to see John every year and have him give me pointers on my casting. I am pretty sure they have been the same suggestions each year, but do to my lack of dedication to the matter the basics must be mastered before you can move on. Like you must learn addition before you can move onto multiplication.

The rod mentioned above was a special rod. It was built for myself as a 2/3 weight. I brought this rod out to the group to cast as an after thought really. I wasn't that proud of it. When the group asked for a 4 wt line the rod came alive. I was amazed and embarrassed at the same time. Its somewhat like the old phrase about beauty, its hard to describe but you know it when you see it. You could tell just by watching the rod that it was casting great. It is a great casting rod that has a medium flex. I never really thought I was a fan of that slow of a rod, but I am now. At times I still get a little embarrassed when I think that I was off by 2 line weights on that rod, but I quickly tell myself how lucky that I am to have found it.


I sold that rod to a first time buyer to the bamboo world Dan Daufel. Dan and his brother are certified fly fishing junkies with Dan being a former employee of Simms. I have attached a photo of his brother with the rod. I hope they catch a lot more fish on that rod. 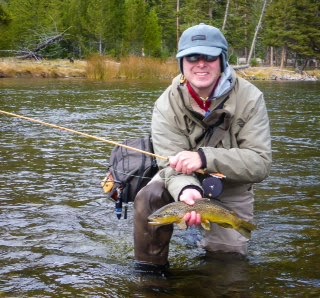 Posted by Cris Carpenter at 7:04 PM No comments:

Here is a picture of the first rod that I am sending to Japan. I will be traveling there next year to exhibit with Shuichi Akimaru. It's a 8'4" 3 weight rod. This is by far my most popular taper. Its darkly flamed and will be one of the last rods that I do like this. 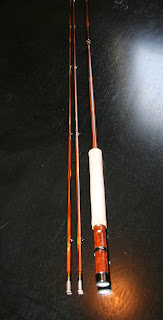 Posted by Cris Carpenter at 8:32 AM No comments:

Here is a couple of pics of a rod that I sent out this week. Its an 8' 3/4 weight. I have made several of these recently in a beautiful natural blonde color. I am currently making myself one since I sold mine at the Henry's Fork rod gathering this summer. This rod has a 13 cork grip. I go back and forth about whether I prefer a 12 ring or 13 ring grip. This month its 13 rings! I am trying a new process on my rods in order for the blueing to last longer. I hope to get some good reports from customers about this process and how its holding up. My goal is that the blueing will look brand new 10 years from now no matter how much you fish the rod. 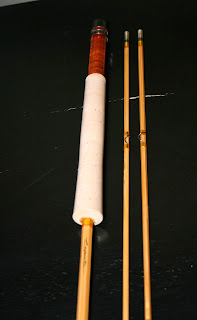 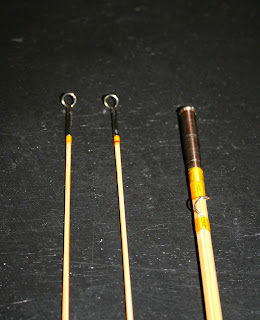 Posted by Cris Carpenter at 7:50 AM No comments:

Well, it was Christmas in October today. My new strip saw arrived. I wasn't really sure what to expect since Bellinger hadn't been marketing them, but I love it! I would say it is easier to use than the gangsaw. Two reasons why I think this; the first is its lighter and the other is it is much shorter. It doesn't take up half of the workshop with the long runners that the gangsaw had. Another bonus is that its a lot quieter than the gangsaw. I had to wear ear protection with the older version, but the strip saw is  pretty quiet. 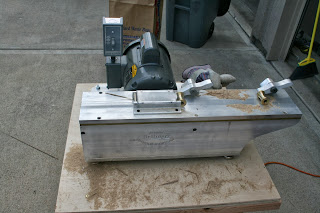 Posted by Cris Carpenter at 1:45 PM No comments: