I thought this to be an interesting story and worth sharing. The story goes like this:

My wife's grandfather loved to fish. He especially liked going to Bennett Springs State Park. It's about the nicest version of what Missouri has to offer in the way of trout fishing. On his passing about 20 years ago the family wanted to do something for Bennett Springs to honor him. He loved to sit on the bank and watch, when he himself wasn't fishing.

Their first idea was to donate a nice bench in his favorite spot so that others could enjoy watching the experience as well. However, the people that ran the park felt like they didn't want benches in the park. So my wife's family asked them what it was that they would want, since they didn't like any of their suggestions. The answer they got was a nice table. This was for the fisherman to sign their daily tag on. The family thought that this was a very nice idea. They spent several thousand dollars on this table so that it could be enjoyed by everyone at Bennett Springs.

However, after about a year the table disappeared. The family looked around and asked about its location. They found the table in another building at the park. When they asked why it was moved it was said that the table was to big for the location. The table became home to pamphlets and brochures on trout fishing and the area. It was in a building that most people didn't visit in an off the beaten path location. Here it remained for the next few of years. Since most people didn't frequent the location we didn't either.

A few years back we went to the previous location to look for the table. The table was gone and we couldn't get an answer to where the location of it was. None of the park employees were sure what happened to it. My mother-in-law was pretty upset by this. Another item that didn't help her feelings was that shortly after they bought the table and it disappeared, the park started letting people purchase benches for the park to honor family members.

After a campaign to find the table, my mother-in-law finally found the park manager. He knew exactly where the table was and offered to let her have it back. Her first response was that she wanted the park to keep it and use it. He plainly said that it wasn't something the park would ever use. So her and my father-in-law picked up the table. In the pictures you will see three cut outs where oak boxes sat to hold safety pins, string and pens. These were in pretty bad shape. I plan to have those fixed to their original state. Since the table had only been used for one year in the main public and sparingly for paperwork, someone had not been very nice to the table. This really hurt my mother-in-laws feelings.

I now have the table and plan to incorporate it into my families love of fishing. I don't get tired of looking at the hand carved fishing scene. 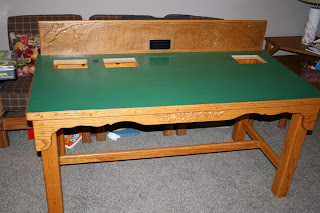 Posted by Cris Carpenter at 12:28 PM No comments:

This picture is of a mid section that belongs to a 8'4" 3 weight 3 piece rod. I have worked on this taper for awhile and I think this is it. When this rod is done it will be heading to Switzerland.

I will be hollowing for most of the day and then I will be glueing up tomorrow.

It looks like I am going to have an extra 8'4" 3 weight 2 piece rod available by Christmas if anyone out there is interested. It is dark flamed with a Koa reel seat. 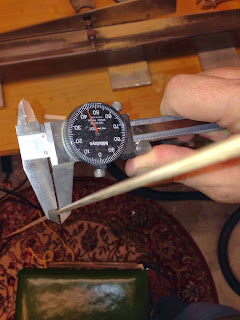 Posted by Cris Carpenter at 8:30 AM No comments:

The 8'6" prototype is complete

Some time ago I had several requests for a 8'6" 4 weight rod. I had always planned on building in this length, but had never gotten to it. However, I can't say that anymore.

This rod is comes in at 3.32 oz. and has a medium fast action. One can use either a 4 wt line on it or a 3 wt depending on what the weather/fishing conditions might be. It does have the new Hariki extra small ferrules on it and they are very nice.

This rod will start going out to customers next week for their approval.

The line I plan on using with this rod is a Terenzio Silk line. This was sent to me by a good friend that loves these lines on my rods. I have never used one of these types of lines before so I am very excited about getting out on the water with it. This line has a designation of 3.5 weight line. So it is suppose to be right between a 3 and 4 wt line. I hope to have a report about this combination later on.

I want to speak briefly about taper platforms. On my rods I have basically three platforms that I make rods off of. The newest will be the 8'5" and 8'6" platform. My most popular rods are on the 8'4" platform and then there is the 8' platform. Obviously since these have different lengths things have to be changed with in the numbers to achieve the feel I like. Also, the platforms have different inside tapers that are achieved through different hollowing. As one can imagine since the longer rods have 6" more material than the shorter rods. Larger pockets are placed in different locations within the rod in order to have a crisp rod that doesn't break down under the casting. 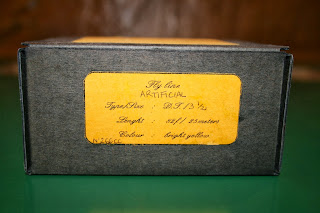 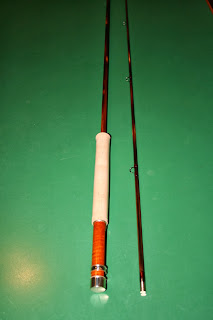 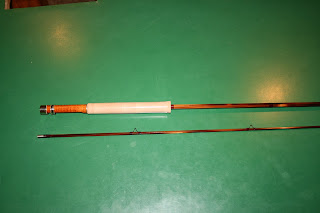 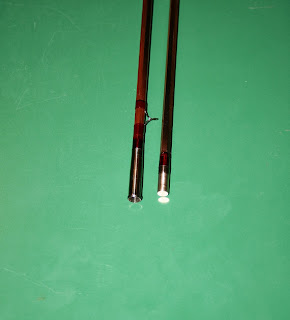 Posted by Cris Carpenter at 8:12 AM No comments: