Something I have never liked about hardware is the fact it loses its blueing. I have always been interested in applying something to the hardware so that it keeps its blueing for as long as possible. There are several things out there that people suggest. I haven't tried many of them. However, I do have something that a very prominent builder once told me about. In the picture below you can see the light variation in color from the bottom part of the ferrule (where the wraps go) to the top part, which is the female section. I haven't been doing this process for years and years, so I don't know if it will hold up for long periods of time. I hope so based on the knowledge of someone that had been building for over 30 years.

I am currently in the middle of building spring and summer orders. I will be at the Henry's Fork for almost 3 weeks if you are out there. Then it will be off to Crested Butte, CO for a week. I hope to see some of you out there! 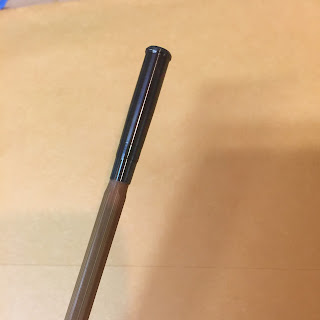 Posted by Cris Carpenter at 3:53 AM No comments: